"Let us not take ourselves too seriously. None of us has a monopoly on wisdom."

In 1928, after their first meeting when she was two years old, the future prime minister wrote of his first impression that she was "a character ...  having an air of authority and reflectiveness astonishing in an infant." 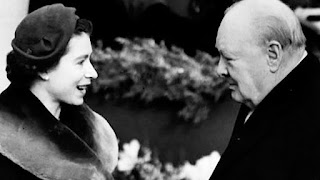 "She was a highly conscientious young woman, with wisdom beyond her years," said John Colville, who served as private secretary to Princess Elizabeth from 1947 to 1949.

Queen Elizabeth II was crowned sovereign on 2 June 1953 in Westminster Abbey, following the death of her father, King George VI, who had been the monarch since 1937.

Thus began a working relationship and friendship in which Prime Minister Winston Churchill and Queen Elizabeth II met for weekly meetings, prescribed by British law, which stretched from 30 minutes to two hours, of which no records were kept.

Henry Marten, the vice provost of Eton College, schooled Princess Elizabeth on constitutional history. 1  Churchill tutored a queen without formal education on the complexities of constitutional monarchy, politics, practices, and the law. Both had a profound effect on helping her to become the respected royal icon she was--up to the moment of her passing on 8 September 2022. 2

Liz Truss became the U.K.'s new prime minister after meeting with the Queen at Balmoral Castle in Scotland on 6 September 2022. Truss was formally asked by the Head of State to form a new government after the resignation of Prime Minister Boris Johnson.

Understanding the longevity of Queen Elizabeth II's success comes from knowing who she was and how she approached her role. The Queen's vast time on the world's stage begins with a crisis in the Suez Canal (1956) and ends with the Russian invasion of Ukraine (2022).

Queen Elizabeth II, the longest reigning monarch in British history at 70 years and 214 days, combined a royal heritage, and inspirational character, with a profound faith. "She reveres the work she believes God gave her," according to one biographer. Those are appropriate values for someone who was also the Supreme Governor of the Church of England.

Self-effacing, common sense, and the ability to know the pulse of her people. The Queen displayed those qualities and more, though infallible she was not.

British law forbids a king or queen from giving orders or publicly taking sides on matters of state, though they are free to ask questions and offer a point of view. That means a well-read Queen Elizabeth II, with a wealth of historical perspective, including state secrets placed in her Red Box, was trained to be discreet with her thoughts.

News reports from No. 10 Downing Street, London, imply that her credibility with prime ministers was reinforced by restraint. Former British Prime Minister John Major said Queen Elizabeth II was a "safe place to speak openly without fear of reprisal."

She knew legitimate areas for giving counsel and when the process ended. Unlike most executive coaches who focus on the client, the Queen was interested in both the client and the institution. That is the United Kingdom of Great Britain and Northern Ireland.

In 2019, The Wall Street Journal proclaimed Queen Elizabeth II as "the world's most experienced executive mentor."

Suppose the Queen had published her principles for being a trusted advisor (a guaranteed bestseller). The Journal suggested a short table of contents--letting clients speak openly, guarding their secrets, redirecting their thinking--incrementally; and doing everything with humility.

All of which takes practice.

Queen Elizabeth II knew what seasoned coaches know--the only way to let leaders learn and grow is by allowing them to make their own mistakes.

Can someone old school who lived to ninety-six be institutional and fresh in their thinking?

When Winston Churchill died in 1965, Queen Elizabeth II broke protocol by arriving at his funeral before the family at St. Paul's Cathedral in London. She wanted to be there to show respect and honor the man who was her most trusted advisor in the earliest days of her reign.

Usually, the Queen is the last person to arrive at any function.

In the days following the 11 September attacks in 2001, Queen Elizabeth II, breaking 600-year- old tradition, ordered the band of the Coldstream Guards to play "The Star-Spangled Banner" to show solidarity with the U.S.

According to The Guardian, on 13 September 2001, over 3,000 people were gathered outside Buckingham Palace when the band played the U.S. national anthem during the changing of the guard ceremony.

A sovereign sense of humor

On a different note, the Queen is shown jumping out of a plane (a stunt double) with James Bond (Daniel Craig) to begin the 2012 Olympics. Earlier this year, she discloses to Paddington Bear, in a video sketch produced for the Queen's Platinum Jubilee, that while her host keeps a marmalade sandwich under his hat, she keeps one in her purse "for later."

On a visit to Scotland, she was told she looked just like the Queen. Instead of making a scene where she pointed out she was the Queen, Her Majesty replied, "How reassuring." 3

Queen Elizabeth II was a dignified figure with a lineage of thirty-seven generations. Yet behind that pedigree, she was a "character," as Winston Churchill first observed.

How true his description proved to be.

1 Elizabeth and Margaret: Love and Loyalty

3 The Wicked Wit of Queen Elizabeth