"Remember, the unmoored boat floats about."

A business or individual? 1

Overall, two out of every three businesses with employees will last two years, according to the U.S. Bureau of Labor Statistics. About half will last five years.

Smaller businesses dominate the commerce landscape. According to the BLS, nearly 20% of those businesses fail within the first year of opening. After five years half of those size companies go out of business--and only about 30% make it to year 10, as reported in Forbes Magazine.

Larger corporations have a lot of inefficiencies. The English economist, E. F. Schumacher, pointed toward this factor in his book, "Small is Beautiful." That may contribute to their disappearance as they are then bought out, merged, or go bankrupt.

McKinsey & Company estimates that by 2027 75% of the companies currently quoted on the S&P will be gone.

Organizations, big and small, can be around for decades. Some reach the 100-year mark or more such as Coca-Cola, UPS, L.L. Bean, and Kellogg's. Or smaller enterprises such as Seaside Inn, Casewell-Massey, or Pensacola Hardware, which began in 1851.

In addition to having the right people, products or services, and favorable market conditions, researchers have identified two "incongruous" practices carried out simultaneously for a long life:

First, have and preserve a stable core, an unchanging organizational purpose.

The second step is to have a disruptive edge, which involves bringing in outside expertise and learning from other sectors (even the ones that have nothing to do with yours).

Along with other key factors, including luck, those who achieve longevity appear to balance the radical and traditional to stay on top of their respective fields. 2

What's in the core?

Much has been written about Chick-fil-A, the 55-year-old family-owned business with 2,700 restaurants located across 47 states, Washington DC, Puerto Rico, and Canada. Franchise Times reported system-wide sales totaled $16.7 billion in 2021.

(C) Chik-fil-A
How does the company generate consistently impressive results?
By joining its organizational core with corporate discernment in practical matters. Both are critical for the execution of strategy. In a highly competitive industry, the Atlanta-based company finds a way to make the ingredients of culture, customer service, tasty chicken, and common sense come together--most of the time.
No ingredient by itself explains the company's success.
Here's a closer look at Chick-fil-A: 3
--The chain's business model is unique among its competitors--explicitly guided by Christian values.
--Founder Truett Cathy's faith was embedded into business practices that have directly contributed to the company's success. Mr. Cathy's beliefs are the rulebook for running one of the restaurants. These values are now overseen by his son, current CEO, Dan Cathy.  The elder Cathy passed in 2014 at age 93.
--The secret weapon is its rigorous franchise operator-selection process that finds and trains "Truett Cathy clones." Chick-fil-A's acceptance rate for new owners is 37x more selective than Harvard University. And the start-up fee is $10,000 compared to McDonald's $1.8 million fee.
--Industry insiders observe that while Chick-fil-A's culture gets most of the attention, the company is populated with top-notch management who are constantly investing in the future.
--For the eighth year in a row, the restaurant chain was voted American's favorite place to eat, according to the American Customer Satisfaction Index. Chick-fil-A is periodically called out for its support of conservative cultural causes. However, from 2012 to 2019 at the height of this backlash, systemwide sales went from $4.6 billion to $10.5 billion.
In that same period, the average store location grew from $2.6 million to $4.6 million in sales.
(Jim Collins makes the point that it doesn't matter what core values you have. It matters that you have core values. And that you preserve and are passionately committed to them.)
--By being closed on Sunday, it's estimated that Chick-fil-A gives up $1 billion annually in revenue. Is it worth that price? Leadership says it is. A day off for employees, management, and an opportunity to attend a house of worship is an original corporate value. 4
Not playing it safe
With core and operating fundamentals established, does Chick-fil-A have a disruptive edge?
Management believes the path to a viable future is combining Christian values with Silicon Valley ideology.
1.  The company brought in expertise from Ritz Carlton Hotels and other places to codify hospitality and politeness ("My pleasure.") The goal is to integrate those behaviors with a simple and reasonably priced menu. 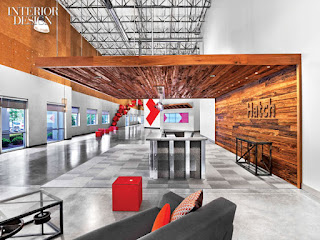 (C) Hatch Innovation Center Chik-fil-A/Interior Design Magazine
2.  At the Hatch, a company incubator designed to explore next-generation service, Chick-fil-A is looking at drones and driverless delivery. Will robots be as polite as a carefully trained workforce?
3.  Planning is straightforward. Values stay--everything else is on the table.
Where is Chick-fil-A in its lifecycle?
David Farmer, vice-president, of Menu Strategy and Development, says progressing gradually is essential. "You have to evolve."
In a meeting with top management, CEO Dan Cathy, said, "One day Chick-fil-A will no longer exist." He was referring to the diminishing lifespan of businesses.
What does Cathy's caution mean for his 170,000 team members? Without overpromising, and with everpresent Chick-fil-A values: provide great service; offer good food at fair prices; continually improve, and be hospitable to everyone.
For now, the only closing Chick-fil-A customers have to think about is Sunday.
1   U.S. overall life expectancy is 77 years--CDC.gov.
2  Harvard Business Review, September 2018.
3  Business Insider, August 2019.
4. Hobby Lobby, a $6.4 billion business, is also closed on Sunday.
www.Strategist.com
© Bredholt & Co.
Posted by Russ Bredholt Jr at 12:30 AM