"In the end all bubbles pop. That's what bubbles do."

Supposedly at the peak of the Dutch tulip mania in 1637 certain bulbs sold for more than 10 times the annual income of a skilled craftsman.  The reporting of this so-called "bubble" was first popularized in 1841 by British journalist Charles MacKay in his book, Extraordinary Popular Delusions and the Madness of Crowds.

Recent examinations of MacKay's understanding of the tulip mania question his context of that phenomenon.  Nevertheless something suddenly happened to change the price/value relationships of tulip bulbs with the consuming public.  (See graphic below)

It's hard to see up close

Whether it's 17th century tulip bulbs or a 21st century global housing bust, few buyers or investors seem to have the experience or judgment to sense when bubbles are going to burst.

Why?  One reason is that bubbles, by their very nature, are difficult to time.  Otherwise more people would be on the upside of downturns.  Bubbles are best understood in retrospect.

Another is that leaders tend to be wired as optimists.  Who wants to be labeled a "corporate Cassandra?"

Also, success can be a deceptive state of mind.  If all one knows is up, it's hard to recognize the beginning of a downward slope.  Warning signals go off but they're not strong enough at first to get leadership's attention.  Besides, no one relishes being at the helm of an organization in decline.

Having a timely recognition of significant change in the marketplace or regulatory environment is essential.  Transitions, not necessarily change, provide opportunities, if you know where to look.  Miss the moment and a business or nonprofit runs the risk of short-circuiting its future.

What's the next bubble?

The cotton industry bubble already burst.  A year ago it looked as though many households wouldn't be able to afford towels or clothing due to high cotton prices. Twelve months later raw material prices have fallen sharply (even with a drought) mostly due to strong global output, especially in China.

Then there's Facebook.  In addition to shifting its advertising model to smartphones, where more users are accessing the site, the company is dealing with two additional problems.  The first is the law of large numbers.  How does a business maintain double digit growth with a base approaching a billion members?  Recent reports of waning interest in Facebook could be even more damaging.

Maybe it's the manufacturing of commercial airplanes.  The head of a European Aeronautic Defense & Space Co. unit recently issued a statement denying his industry was a bubble about to pop.  "There is 'no bubble' in airplane production," said Airbus CEO Fabrice Bergier.

If one Google's the above question the search produces around six million web pages on this topic.

Dr. Mark Perry at the University of Michigan writes about higher education being on an unsustainable course.  Even with discounting from the "sticker price" and financial aid packages, student indebtedness hovers around a trillion dollars in the U. S. (See graphic below) 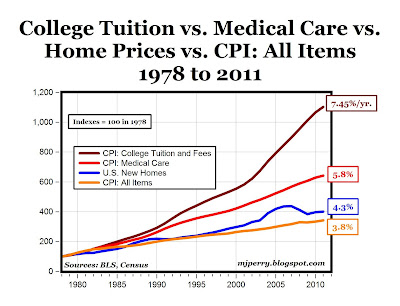 In, The Higher Education Bubble, Glenn Harlan Reynolds, a law professor at the University of Tennessee, says that an education bubble exists for the same reason as the 2007-2009 housing bubble.

In a recent interview Professor Reynolds stated: "The government decided that too few people owned homes/went to college, so government money was poured into subsidized and sometimes subprime mortgages/student loans, with the predictable result that housing prices/college tuitions soared and many borrowers went bust."

More attention is being paid to the plight of college students putting higher education on the political agenda of the 2012 American presidential election.

The driving forces pushing higher education in a different direction include:


A recent study by Bain Consulting and Sterling Partners shows a deterioration of university balance sheets.  Their report indicates that the "build, spend and diversify" strategy has over-leveraged a growing number of schools. Long-term debt is increasing at an average rate of about 12% a year with a corresponding growth in interest expense.

The findings include top tier schools such as Harvard, Yale and Duke.  However, it's the second- and third-tier institutions that are most vulnerable, says the study.

The termination of Teresa Sullivan in June this year as president of the University of Virginia, and reinstated 16 days later, had to do with her supposed lack of vision to address challenges facing UVA. This was the main charge by lead trustee, Helen Dragas, who reversed course and voted to keep Ms. Williams.

The about face comes after a threat by Virginia Governor Bob McDonnell to replace all trustees if they couldn't resolve the matter.

Anyone want to be a university president?

A new kind of semester
There's no shortage of ideas as to what might be done--including the merger option.

A recent article in The Wall Street Journal by columnist David Wessel looks at a "technology/in-class hybrid" teaching model as a way to cap tuition.  A study by Ithaka S + R, a higher education think tank and Carnegie Mellon University's Online Learning Initiative, found that students who took an online course did just as well as those in the conventional course.

Florida is looking into the possibility of launching an all online university.  Referred to as, "Online U," it would be the first state in the U. S. to go this direction.  If Online U becomes reality it will be Florida's 13th university.

Reducing operating costs without losing institutional purpose, values, and for many, residential experience, may be the immediate concerns facing administrators and trustees.  This is especially true among independent colleges which tend to be tuition-driven with small endowments.

Whether talking about administrative efficiencies, a market correction for higher education, or a tuition bubble, perhaps there is something to learn from William Shakespeare.  The English poet and playwright wrote in Hamlet, "If it be not now, yet it will come. Readiness is all."